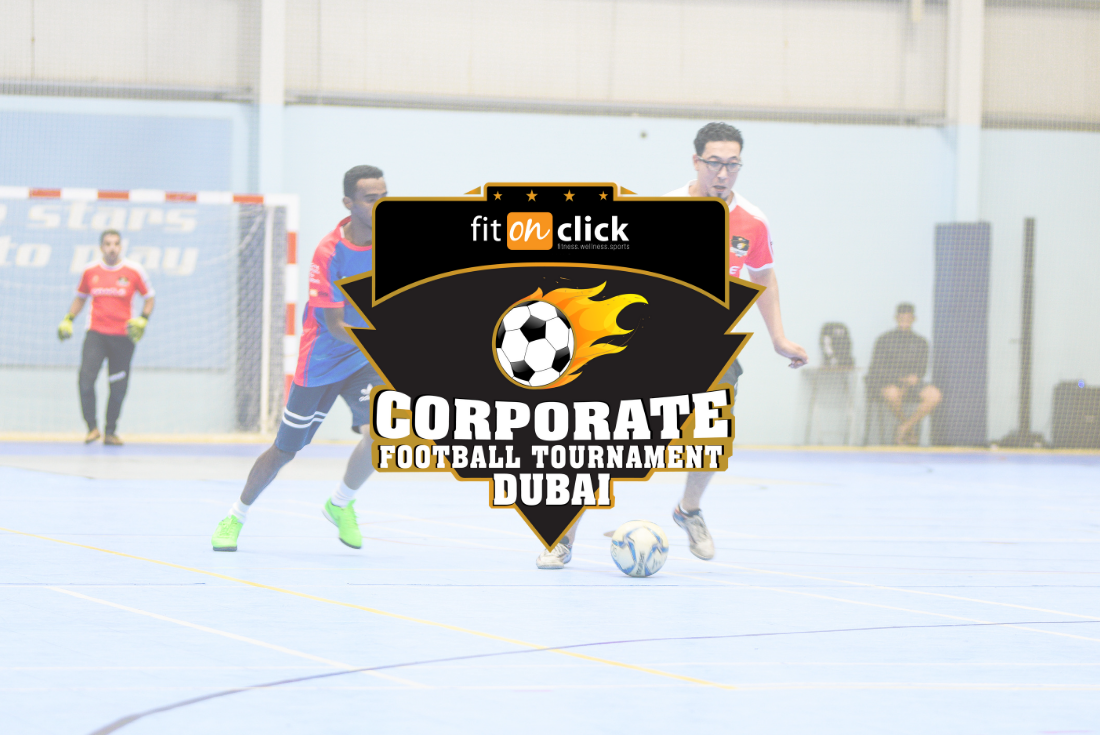 Another corporate tournament successfully organized with an aim to promote corporate wellness among employees. The third edition of Fit On Click Corporate Football tournament presented by Dubai Islamic Bank and supported by Dubai Sports Council saw 16 leading corporates go up against one another over one week in an indoor 5 a side format played in Dubai Starz, Mirdif. The teams were divided into four groups and the top two teams of each group further qualified for the knockout rounds. The competition had all the major outdoor rules and comprised of 12 minutes per half. One specific rule which made the entire tournament a whole lot interesting was the rolling substitutions, this ensured that the players on the pitch were always full of energy and there was never a dull moment for the fans watching their teams go about on the pitch.

A couple of days before the tournament kicked off, all the captains and team representatives were invited for a video shoot for the official video of the tournament. All the 16 captains literally felt like celebrities with 3 cameramen and a director assigned to record our captains performing various skill moves. The organisers also used this time to hold the trophy and jersey unveiling session in order to motivate the team captains and let them get used to their corporate colours which they would be wearing over the next week. The captains were excited and ready for action and so were we, to organise a tournament for such wonderful and exciting corporates.

The tournament kicked off in an exciting fashion with the debutants Talabat Heroes going up against the last editions quarter-finalist AW Rostamani’s. In an impressive fashion, the newbies stunned everyone to pull off a comprehensive victory against the experienced AWR, nothing better to start a tournament than an early upset. This really set the tone of the tournament indicating anything can happen and games like these really motivated the inexperienced corporates to go and put out their best foot forward.

Medcare and Axiom played a memorable game on the very first day of the tournament with the rolling substitution aspect coming into play and turning the entire game around. Medcare were losing by a goal for the majority of the game until the last three mins where they decided to bring on a super substitution who changed the fate of the entire game with the substitute providing Medcare with a very last minute goal to let them salvage a significant point. But this draw certainly opened the group up for the remaining teams like Engineering Contracting Company (ECC) and UAE Exchange.

There were some really close and nail-biting games but at the other end of the spectrum, there were some absolute whitewashes, one of them which really stands out on Day 2 is Dubai Islamic Bank against BSA. As BSA had no answer to the constant attack and experience of Dubai Islamic Bank plummeting them to a heavy 9 goal defeat, the team were in distraught after being heavily outplayed. But even after this heavy terrible defeat the character they showed in tuning their campaign around qualify for the quarterfinals was something to acknowledge and respect.

When the knockout rounds started creeping up on our corporates. The pressure got intense and the stakes even grew higher as rivalries started to emerge. One such dramatic game we witnessed in this Corporate Football Tournament was Deyaar going up against Jotun, with qualification up for grabs for the winner. Things certainly got heated, tackles became more dangerous, their fans got more vocal, the nerves started to settle as jotun bagged in the first goal. But Deyaar was having none of it as they executed an excellent comeback to register their team in the quarterfinals.

Teams like Tristar, Kreston Menon, Jubaili Bros and Taqeef just missed out on qualification and certainly deserve an honorable mention.

The Group Stages Concluded with heartbreaks and some surprise entrants to the knockout rounds. One of the teams which really took the limelight during the quarterfinals was Oracle as they defeated the Peaky Blinders (Xerox) in an evenly fought contest. Both these teams had won 2 games and drew 1, there was no separating these two sides. An all even game with both the teams scoring a brace each was really the tale of this fixture until much to everyone’s surprise Oracle switched on their afterburners to run away with a win by scoring 3 goals in a span of the last 2 minutes of the game. 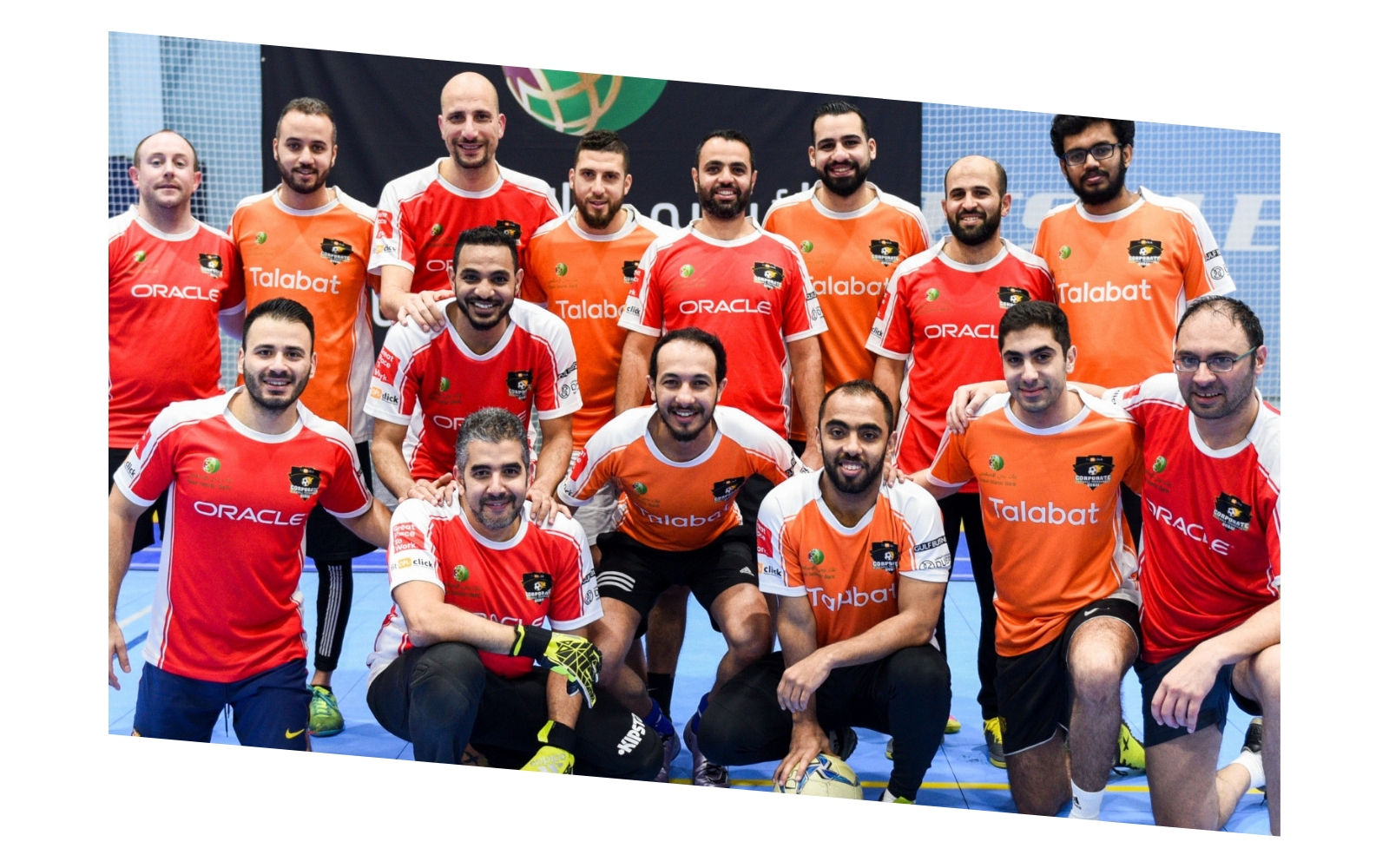 The Semifinals comprised of matches we will never forget in a very long time to come. Talabat went up against the reigning champions Dubai Islamic Bank. An eye-watering fixture on paper and an eye-watering game to watch as well. Both these teams knew only one word in when it came to football, and that was Attack! An absolute goal-fest was witnessed in this match, with the Talabat heroes securing not one but a two-goal lead in less than 5 minutes of game time.

Everyone at the venue thought this was it, there goes Dubai Islamic Bank’s undefeated run in this competition. But the players had not given up yet, and they never looked like giving up. They showed their character and class to comeback excellently and turn the game by its head to win and keep their streak alive. On to the finals went Dubai Islamic Bank yet again. 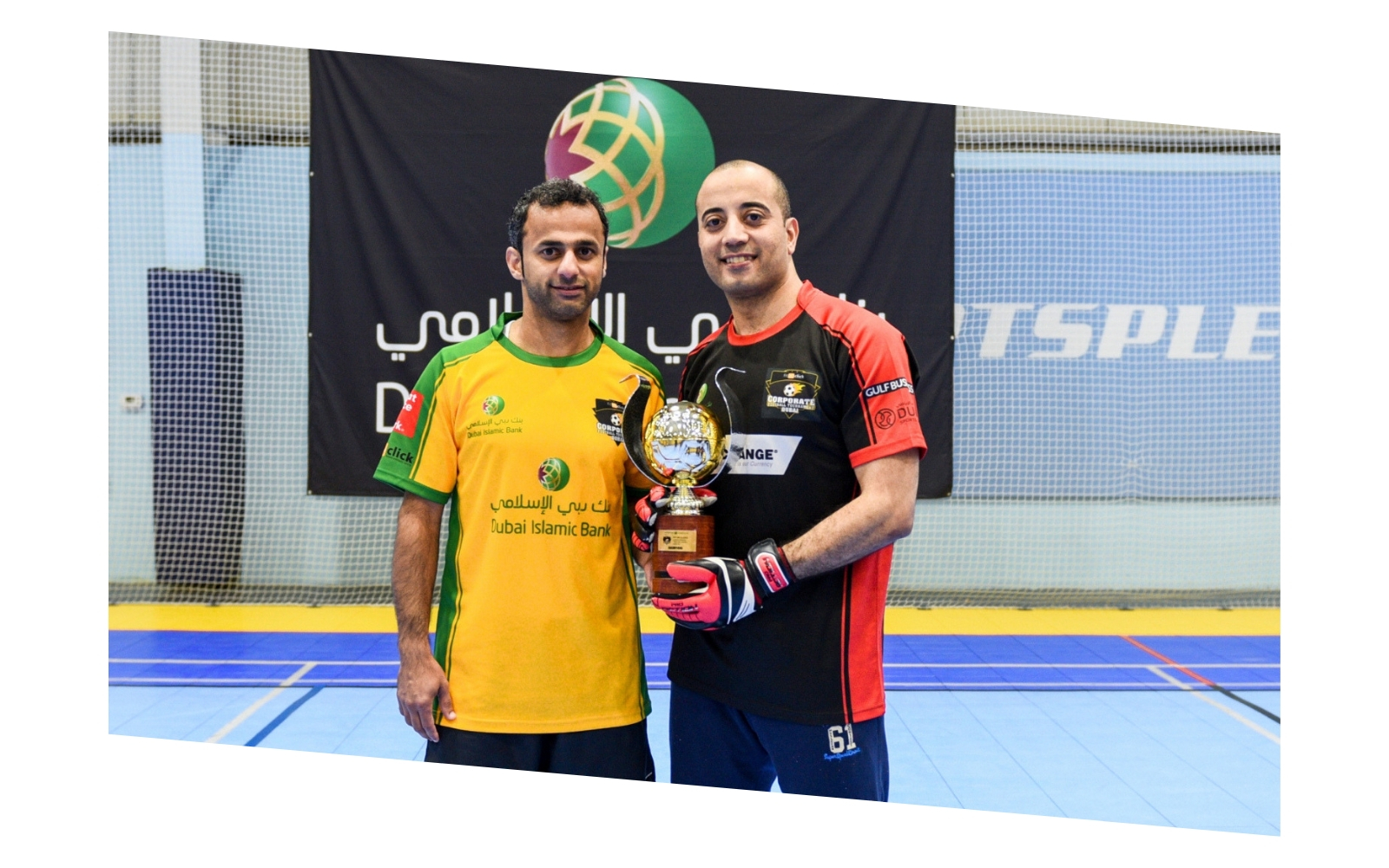 The Finalists were decided and the stage was set, current reigning champions and undefeated in this tournament Dubai Islamic Bank went up against UAE Exchange who also was undefeated. Both these teams only knew how to win, while one team does it through beautiful attacking football while the other team wins through their resolute defending and making it tough for their opponents to score against them. It was a match of attack versus defence.

The match started perfectly for UAE Exchange as they went on to score an early goal and now they could do what they have always done best that is defend. But as we all knew and expected Dubai Islamic Bank was not going to keep quiet and let them get shut out and they did just that to outclass UAE Exchange’s defence. In the end, DIB’s attack just proved to be a little too much and for the second time in a row they went on to lift the big trophy. What a match it was to end this tournament.

Last but not least

UAE Exchange and Dubai Islamic Bank lifted the runners up and the winners’ trophy respectively. Talabat emerged victorious against Oracle in a really good game of football to lift the third-place trophy, and safe to say it was very well deserved. There were also some special individual awards up for grabs to recognize players who played extremely well. The best goalkeeper of the tournament or the golden glove was awarded to Ahmed Elkammash from UAE Exchange thanks to some astronomical saves he made throughout the tournament to keep his team in the competition. Shady Aboufarag from Dubai Islamic Bank took the golden boot (Top Scorer) award home after scoring a colossal 12 goals in the entirety of the tournament. An unforgettable tournament and something we all will keep talking about in the months to come. 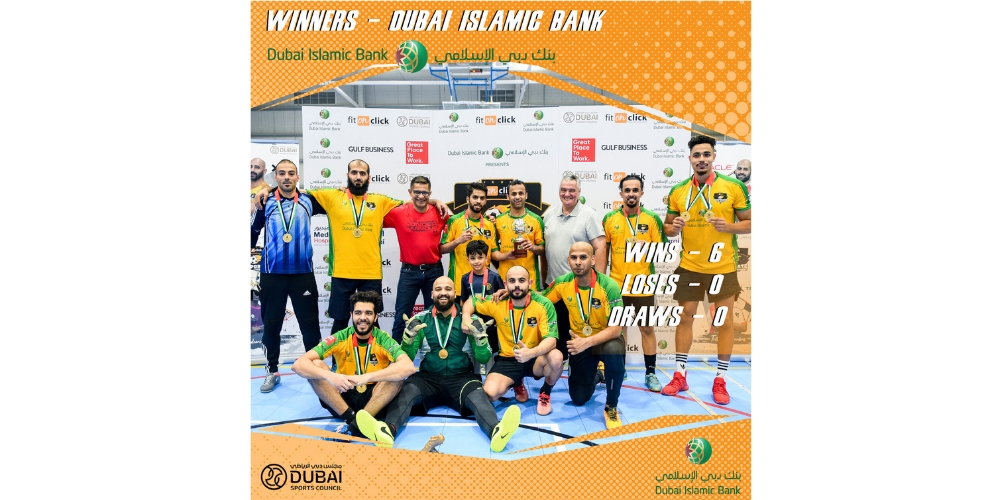 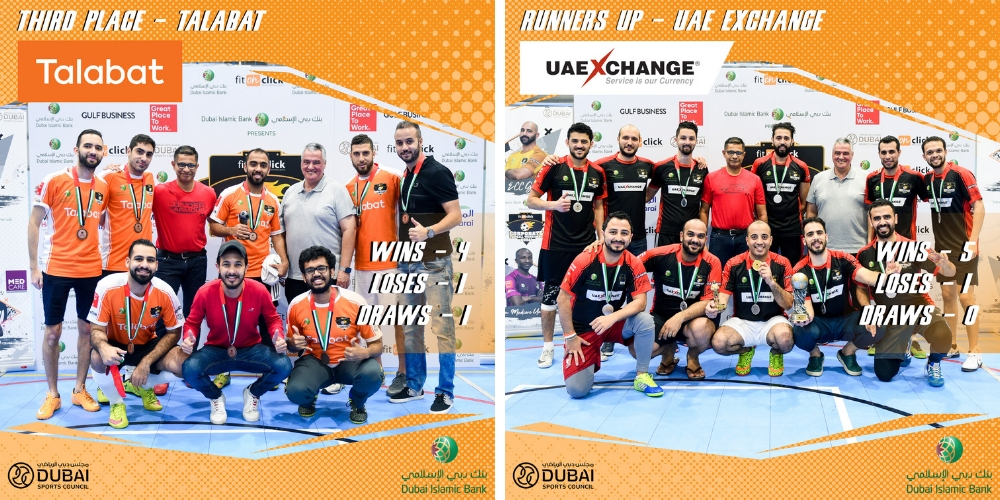 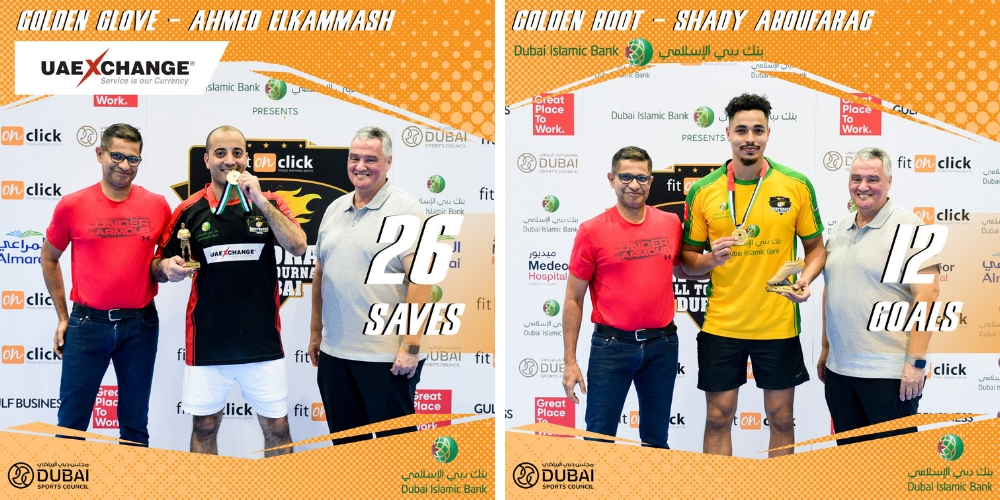 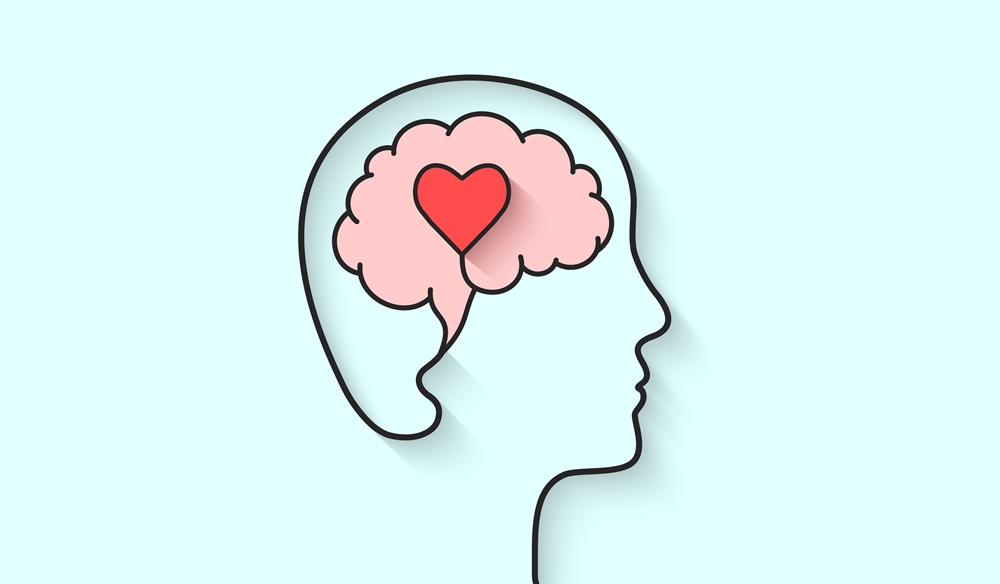 As per an article published in Gulf Business on 27th April which talks about "A knock-on effect of the pandemic could be addiction and mental health problems". The main reasons liste ... 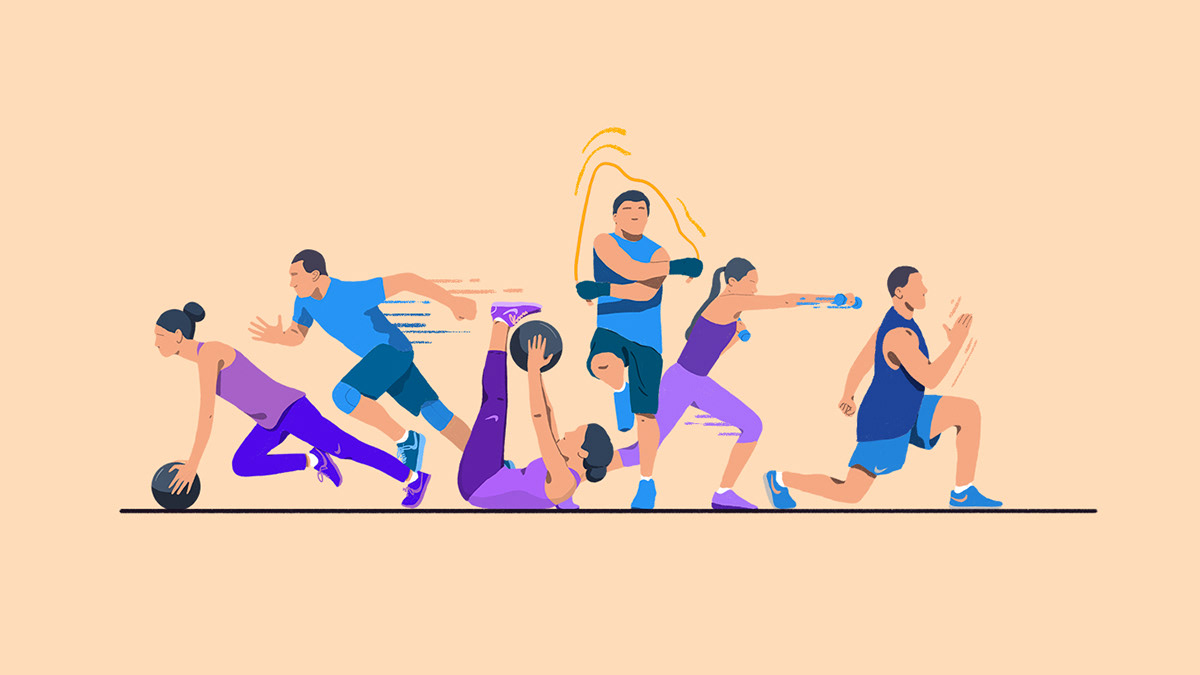 Exercising Outdoor is Permitted - Read the Dos and Donts

Exercise is permitted within certain rules - Dubai eases COVID 19 restrictions - COVID-19 restrictions have been eased in the emirate, authorities said. However, some rules are stil ... 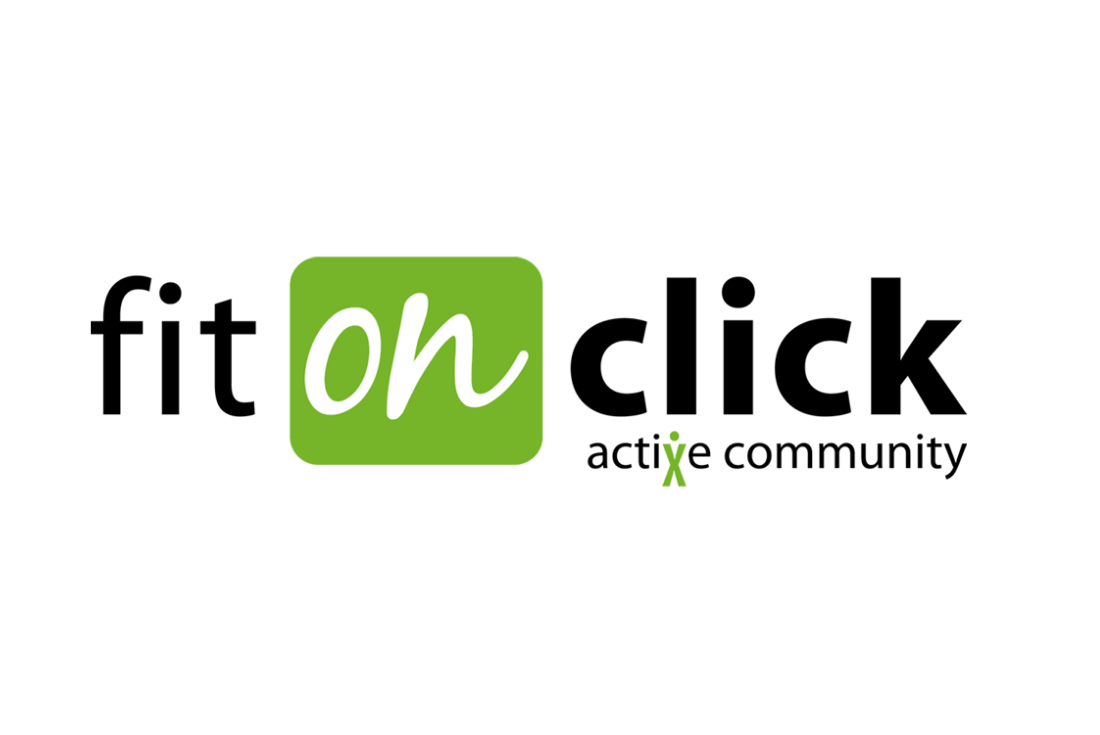